One of the things I was really excited about when I learned of the Learning Creative Learning course through MIT was the list of activities students would be asked to complete. Since I have just started exploring Scratch with the Super Scratch Programming Adventure! book (I’m only on Stage 3) I appreciated the opportunity to try using Scratch for a different purpose through this course. Likewise, I had emailed the creators of TurtleArt earlier this fall to ask for the software after seeing some project examples at a conference and I was excited to have a reason to try out the programming.

For the Scratch activity, we were asked to “create a Scratch project about things you like to do, then share it” in the course gallery. Below is my very quick attempt at sharing some things I like (technology/computers, beaches, playing and playgrounds).

Learn more about this project

In week four, we were asked to “Create a project with TurtleArt, and reflect on any “powerful ideas” you engaged with in the process.” I spent some time exploring different TurtleArt commands but all of my creations felt pretty basic. Next, I considered starting from an existing project and then re-mixing it to make it my own, something that could tie into this week’s topic in both this course and #etmooc of Open Learning. I ran into some technical issues and wasn’t able to import any projects so I took some more time to just explore. Then, I decided to use the TurtleArt Cards to mashup some of the different projects into a new creation. I experimented with adding my own ideas along the way and eventually came up with what I called a Garden Maze.

As I sat outside at a local park and finished reading Papert’s paper on idea power, I took in my surroundings – children laughing and climbing on various structures, sun shining brightly onto my iPad where I was reading, and city sounds whizzing by on either side. Ensconced in this little spot of nature within the busy streets of Philadelphia, I reflected on how valuable these safe spaces for play, exploration and discovery are for all of us in our development as thinkers and idea constructors.

To me, the idea of these spaces is powerful because they remain valuable across domains and it’s an idea that’s also fairly easy to understand, since most people have been exposed to some type of space like this during their lifetime. And of course, this idea is personal because it is something I have discovered through my own experiences. When I have the ability to help create a safe space for play, exploration, and discovery on my own (which for me, involves both quiet and noise, warmth and sunshine, people and solitude, time and a sense of freedom – to try, to learn, and to fail), I consistently engage with ideas in a more meaningful way. I am able to push myself to try new things, to test out Scratch and TurtleArt, even when I feel like I don’t know exactly what I’m doing. 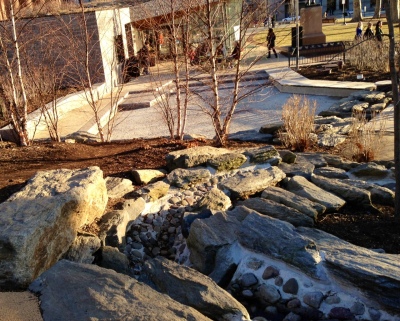 Throughout my lifetime, there have been a range of people who have helped expose me to these types of spaces and scaffolded my understanding of them so that I could begin to construct my own understanding of what was necessary to create these spaces. Certain environments, like parks and playgrounds, have supported my experience in learning what these spaces can look like and the different components they often entail. When I think about Papert’s quote, that  “when ideas go to school they lose their power,” I think of the need to change schools and make room for the spaces I spoke of above.

Luckily, I seem to be one of many people who have seen this need and found power in the idea of safe spaces for exploration, discovery, and play (work) because the Maker movement is already working to bring Makerspaces to schools and communities. Hopefully, in time, these spaces will become more accessible and equitable so that all children can have places in school where they can play and explore resources that facilitate the empowerment of ideas again. Just as Papert was a proponent of integrating computer programming in school to help children carry ideas, I think it would be powerful to integrate makerspaces or any space that is safe for children to explore, discover, play/work, fail and try again.