Misadventures in Connected Learning … But That’s Not All!

Before the second week of #etmooc “Connected Learning” slips away, I wanted to write a post reflecting a bit on the prompt: “Is it possible for our classrooms to support this kind of (connected) learning? If so, how?”

I definitely think that our classrooms can support connected learning and that technology can make the “how” much easier and more feasible to facilitate that learning. To me, connected learning involves engaging students in real-world applications of skills and knowledge. One way to do this is by asking students to try and solve problems that people face everyday, such as concerns with the environment (Inspiration from GOOD.is) or building prototypes to help the elderly more easily navigate outdoors (see the FIRST Jr. Robotics Challenge).

I also view connected learning as a motivation to teach my students tools that can empower and enable them to be change agents. With these tools, students can build meaningful connections across different mediums, connections that not only facilitate learning but establish relationships. This means introducing ideas of digital citizenship and cyber safety at very young ages so students can begin using tools that they will likely continue to use as they grow older instead of tools that they will quickly grow out of (e.g., teaching 2nd graders how to conduct safe and effective Google searches versus restricting them to KidRex and allowing kindergarten students to tweet with other kindergarten students in class).

But most importantly, in my opinion, connected learning translates into global connections and collaborations for all students and teachers.

With modern technologies like Skype, Voicethread, Google Translate, Twitter and other (a)synchronous tools, it can be simple and free to connect students, even if their time zones never overlap or they speak different languages. There is no longer a need for expensive web conferencing technologies and with web 2.0 tools, students don’t have to wait weeks for a reply from students in another country. Therefore, it seems to me that we should be scaffolding and encouraging global connections in every classroom, starting with our youngest students. These connections can blossom into meaningful relationships where students can share experiences and learn together about the cultures, perspectives, and knowledge of each community. That feels like true connected learning.

So what does that look like in the classroom? At my school, I have slowly been working to build some of these local and global connections so students can engage in more connected learning. While we have had some success, we have definitely had a few misadventures as well.

We tried signing up for an Elementary Mystery Skype project created by some  educators who had seen it done with older grades. Three of my teachers signed up, willing to take the risk and do something they had never done before, but although all three were paired with another teacher, none of them heard a response back about setting a date to actually Skype. After following many inspiring #kinderchat teachers, I talked with a kindergarten teacher at my school about having her class join Twitter. We sat down and discussed how it could work, we wrote up a detailed letter to parents, we planned how to introduce it to the students but since their initial Twitter “launch” the class hasn’t been able to get other classes to tweet back. I think the kids are beginning to feel like tweeting means sending a message on the computer and never hearing back. Whether it’s been via Skype, Twitter, or even email, we have found that making that connection with another teacher and class can be much harder than getting the technology or other preparations in order.

1st Graders Excited to Skype with a class in Canada

Luckily, we also have some success stories to share. Thanks to the Global Classroom Project database, I was able to connect our Spanish teacher with a class in Spain so her students could Skype in English and Spanish. While moderating a #globalclassroom chat, I connected with another educator who wanted her students to be able to share their experiences of a Quaker meeting. This led to two of our fourth grade classes Skyping with their fourth grade and discussing their religious practices, as well as the similarities and differences in their schools. Comparing lunches and “specials” was a big highlight. Through Twitter, I was also able to set up a Skype session between a Canadian class and one of our first grade classes – our students were shocked to see all of their snow! And in a few weeks, we have a session scheduled with NASA for our youngest students, who are studying space, to hear about “Humans in Space,” one of the offerings in their Digital Learning Network.

So, while the actual “how” of connected learning can certainly be a challenge, I think it is doable. My students have been able to use a range of web 2.0 tools that have enabled them to develop deeper relationships within their individual classes, between their class and other classes at the school, and between our school and other schools. They are becoming more comfortable with the idea of leaving messages through various platforms and receiving comments and messages back from parents or other students after a pause (which can be tough to understand when you’re only 5 or 6). Teachers are beginning to consider ways we can connect with other students and classes in other parts of the world to enrich their units of study and make different topics and concepts more concrete while also more making them more complex. I hope that with time, patience, and perseverance  our connections will continue to grow and with it, the connected learning that we are all able to share.

How to Draw a PLN – An Exercise in Reflection

After the #etmooc Blackboard Collaborate session Tuesday night with Alec Couros on Connected Learning, I started to think more about my PLN and the prompts that were suggested. How would I define my PLN – in words, in imagery? Being a visual person, I wanted to represent it with a graphic, so I started to think about the best way(s) to do that.

At first, I thought a general mind map might be a good choice. I mentally jotted down “PLN” as the central bubble, expanding outward to three core bubbles of “early childhood education,” “educational technology,” and “global education.” I began to reflect on who and what else belonged in my image but struggled to come up with an accurate depiction. I realized I was struggling with competing wants – trying to arrange my PLN around topics (e.g., ed tech) versus around three W’s: who (e.g., colleagues), what (e.g., Twitter), and where (e.g., at school).

I took a break from trying to name and categorize to search for the best tool to create my visualization. I debated Google Drawings, Mindmeister (which I’ve used successfully before to collaboratively map PLNs among participants in a course I taught – see the image above), and finally settled on trying a new tool, Idea Sketch. I chose this app because I was interested in working by touch (I thought) so I wanted something available on my iPad, I wanted to be able to start with a text list since I had already written out some of my map, and I wanted the ability to color-code. 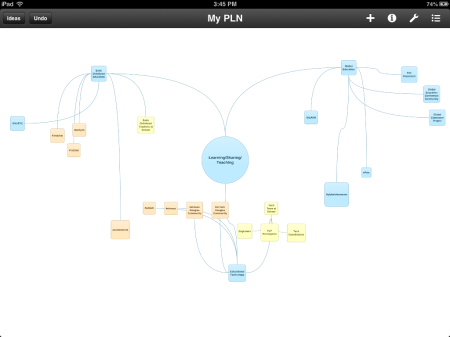 After exploring Idea Sketch for a little bit, I realized it was still going to be a lot more time consuming to create my map there than on paper. A perfect example of when technology can become more of a hinderance to efficiency than a tool  supporting progress. So, I went “back to the drawing board” both literally and figuratively. I started fresh with a piece of paper and decided to re-think the idea of a central “PLN” bubble.

What was really at the center my PLN? I realized that at its core, it was connected learning, teaching, and sharing – with people. I reflected how, at times, I am also at the center of my PLN, drawing connections between three fields that I am passionate about and rarely see intertwined (early ed + ed tech + global ed) but many other times, I’m simply another node, as Joichi Ito suggests, floating in and out of other nodes and networks in my PLN.  I’m not just making connections, I’m looking for them, I’m learning from them and others and at times I can become backgrounded in my own PLN, there as an observer, to “lurk” or shadow conversations that allow me to break down the already thin walls of my PLN and see through into other people’s networks. Sometimes I have the privilege of helping to create ties between someone else’s network and my own, which is always exciting and inspiring, and sometimes I simply have a chance to be a participant in another person’s network and try to support that person as much as I can.

With that in mind, my image of my PLN took on a new form. I knew I couldn’t fit every person and community in my image but I wanted to have enough examples to give a general representation. I created one large circle to define “My PLN,” one with a fuzzy outline because it’s pretty nebulous, at times even transparent or non-existent, as I connect and intersect with others. Then I added three interconnected circles inside, one for each topic that I’m passionate about, allowing for overlaps because many of the W’s I’m engaged with are related to more than one topic. For example, my job as a Lower School Tech Coordinator, allows me to work with students and teachers in early childhood education while focusing on educational technology and using it for global collaboration projects. From there, I began filling in each bubble with organizations, chats, and other types of networks that represent people and communities (e.g., #Kinderchat, SIGELT, Global Classroom Project, and the Tech Team at my school). Outside of these three bubbles, I placed more of the generic “where” and “what” labels that are the environment and home for my PLN, such as “Twitter,” “conferences,” and “Skype.”

I’m confident that this depiction is a) a work-in-progress and b) still not a perfect representation of how I’d like to display my PLN, but it comes pretty close. I also appreciated how much reflection I was able to engage in simply by trying to create this drawing of my PLN. I thought much more about the difference between communities and networks of people and the layers they add compared to the tools and environments that help me to connect. I examined the boundaries and my own place within my PLN more closely and took time to step back and consider where various pieces live within my PLN map.

I (re)discovered that there are many more intersections between global education and educational technology than early childhood and global education, due I believe, to the necessity of technology to connect people across time zones, languages, and countries. I hope that with this awareness in mind, I can re-focus my own energies on seeking out more networks and communities who are integrating ed tech and global ed into early childhood education to add to my PLN.

Ultimately, now that I have my PLN sketch, I want to think more about how it looks and how I see connected learning, teaching, and sharing as the center. Those are the ideals I have built my PLN around and I want to keep them in mind as I consider the idea that there is “strength in weak ties” and in new perspectives. People who are not immersed in my PLN (weaker ties) and who have different passions, can add so much to my own learning and I want to think more about how I can make sure to value that and make my network permeable enough to see, hear, and share their views too.