After taking a hiatus to facilitate a PD institute at my school, start exploring my Google Glass, attend Constructing Modern Knowledge (CMK) and most recently have my wisdom teeth removed – I’m finally taking time to publish my blog posts!

July has been jam packed, primarily because it began with me heading off to new adventures in New Hampshire for the CMK Institute. If you haven’t heard of it before, CMK is an amazing professional development opportunity for anyone interested in making, electronics, Project-Based Learning and Reggio-inspired classrooms … or simply anyone looking for a new learning experience that will push you to think outside the box! 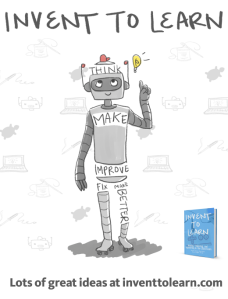 There are too many takeaways from #CMK13 for me to fit them all into one post so I’m going to break them into a couple of reflections. To start, I want to focus on time.

Time was a unique variable at #CMK13 because it was both a constraint and a mobilizer. Time was specifically scaffold to support discovery, meaning that “project development” was a core part of the institute program. Instead of spending time sitting in sessions, waiting for things to begin, or listening to lectures, time was dedicated to learning through doing. With this freedom, we were inspired to let go of our worries about making every minute productive and soaking up as much knowledge as possible from other experts. Instead, we were able to construct our own knowledge by inviting experts to engage with us when we needed their support and utilizing a plethora of resources and materials available for everyone to use.

Time became a mobilizer, that empowered us to use it as we wanted. We could start and stop our work as needed, taking time to pause and reflect, to furiously scour the web for ideas, to “gossip” with new friends or old colleagues, and to play with burgeoning ideas that we hadn’t yet fully formed or understood. Having the opportunity to decide and schedule things as simple as meals made time feel more flexible at #CMK13, it was something that we could mold and shape in the same ways we were molding and shaping the new projects we would create.

Interestingly enough, we were also constrained by time. The looming Friday deadline, when we would need to present our project and ideally have something concrete to show for all of our work and time spent on project development, put a certain amount of strain on everyone. There was concern and worry about having something meaningful to show and being successful in producing what we had set out to make. As most of us work in education, things like grades and assessing achievement came to mind.

Luckily, I think CMK achieves a delicate time balance. Time is enough of a constraint to push participants to actively engage and dive into something they might have otherwise avoided or put off (e.g., learning to program an Arduino or make a cardboard robot). Yet it’s flexible enough that participants begin to realize they can actually redefine success and that while it can be nice to have a “finished project” for the last day, the project can be something that’s completely different than what was originally envisioned. For example, a group that started out thinking about how 9 month old babies could complete circuits ended up creating an interactive crib with a possible build-in camera, light up (zombie) doll, and other awesome features!

Reflecting on my #CMK13 experience, I want to consider how this delicate time balance can be achieved in the classroom and other makerspaces with young children. With constraints like grades and deadlines, how can we make students comfortable enough to try something new and empowered enough to take risks? My school works on a 12 day cycle which makes scheduling a challenge and consistency difficult for both students and teachers. Is the best workaround to have a Maker Club after school that works outside those time boundaries and can allow for the time constraint (club meeting) yet mobilizing (freedom to make and try anything, week after week) balance?