Get Things Done with Trello

My Trello GTD Board

I had a chance to learn more about the Get Things Done (GTD) method created by David Allen this week in my MSU course Teaching for Understanding with Technology. I’ve heard of the GTD method before and even tried exploring it on my own but I always found the process a bit overwhelming. 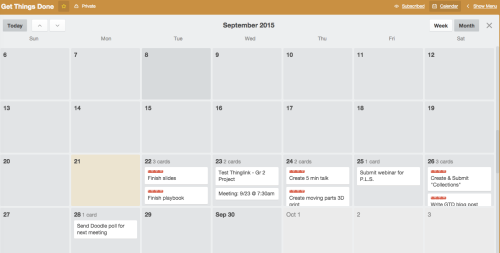 A view of my Trello GTD calendar

I already incorporate a number of different tools (e.g., Evernote, Google Apps, Pinterest, etc) in my workflow to increase productivity but I often find myself reverting to the Mac Stickies app to collect to-do’s and prioritize tasks. Last year, I started playing around with Trello because I liked the visual nature of it and the way it integrates a calendar, checklists, and attachments like Google docs or links. Initially, I setup my Trello using this seven step process but I found it hard to sustain. I realized that I needed to better organize the various projects I’m involved with before figuring out which things to work on each day. Here’s the new system I created:

Collect:
Throughout the day, quickly add cards manually or even via email to the “Stuff” Holding Pen list.

Organize:
At the beginning and end of each day, review the Collect list and organize the cards into their respective project lists or the “Do it!” list if it is a task that takes under two minutes. If it’s a non-actionable item, I’ll add it to one of my Pinterest boards or Evernote, my two main places where I store resources and ideas to revisit later.

Process:
Once tasks are distributed among the project lists, I’ll jump into tackling the actions that take less than two minutes. Then, I’ll give items in my project lists that are a top priority (due in the next 2-4 days) a red label so I’ll know to work on them. Finally, it will be time to get to work on my projects!

I do wish Trello somehow let you have recurring tasks and also cards inside of cards because some projects involve so many actions. I’m excited to see how my new system works over the next few weeks and I’ll try to post an update here to share my experience.