I’m Helping to #TeachTheWeb – Join Me!

Yesterday, I dove into a new MOOC called Teach the Web started by Mozilla and created by a Webmaker Mentor Community of people around the world who are determined and passionate about helping people be empowered to “CREATE the web, rather than just consume it.”

They have a great intro video (that WordPress won’t let me embed) here:

I love the course motto: “Let’s teach the world the web. Together.”

That openness and community aspects are a key part of what drew me to this course, especially after realizing how value the support and relationships were to my learning and involvement in #etmooc.

With summer around the corner, I also like that the MOOC is not too long (9 weeks) and is explicit about the idea that people can participate as they’re able and join at anytime. I’m also excited because the topics align well with work I’m doing right now around examining the Maker Movement, makerspaces, learning to code, learning through doing/making, and integrating that work into education and life as a whole. As Mozilla says, one goal is that by the end of the MOOC, you will be empowered and interested to #teachtheweb #4life!

To jumpstart my involvement with the MOOC, I participated in the live events yesterday, including a Live Stream conversation and a Twitter chat. I’m excited that Twitter chats will be a part of the experience because I think they’re a great way to get to know participants better and spark conversations/ideas that can be continued later in other spaces and ways. I also created a new Thimble project as my introduction. The project proved to be a great opportunity to practice more coding (I struggled a while to get the bullets look the way I wanted!) and apply some skills I’ve already learned.

One of the things I’m most excited about are the Study Groups and the new Google+ community we started with people interested in discussing and learning more about how empower young learners (K-2nd Grade) to teach the web and engage in making. These MiniMakers are the future of the web and I think it’s important for them to have opportunities to engage in creative, open, and meaningful projects that let them create technology. 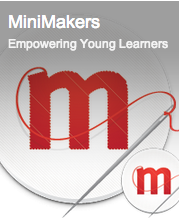 Are you working with young learners and interested in helping them become makers, coders, and creative learners? Join our group! After #etmooc, I can attest to the fact that being part of a community (and the shared inquiry, brainstorming, creation, and support that result from joining) is the best part of a connectivist MOOC.

2 responses to “I’m Helping to #TeachTheWeb – Join Me!”